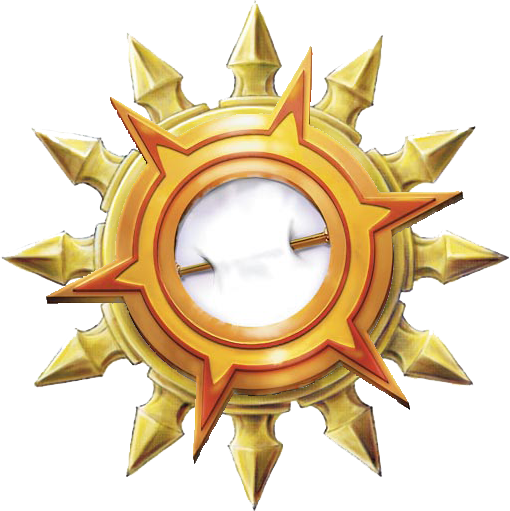 A powerful, exuberant god, Lathander (Lah-THAN-der) is known as the Commander of Heaven and the Morninglord. When Lathander is depicted, he is most often shown as a king in golden armor surrounded by angels in heaven or as a mist of glowing, rose-colored swirls with two golden eyes at the center. As the sole god of the Empire’s state religion, Lathander receives prayer and service from across the empire. Lathander’s name is invoked to seal alliances, protect children, heal the sick and infirm, anoint the Emporer and his counts, and validate the institutions across Burgundria and throughout the Old World. As a result, the god is very popular among all classes and walks of life. Lathander’s noble bearing and demeanor serve him well among the nobility, yet because he encourages his clergy to strike out and start new shrines and temples all over the world, Lathander’s broad-based popularity is rounded out by the many peasant folk aided by his clergy.

Lathander manifests his power as an intense rosy radiance surrounding the bodies of those he favors. Lathander’s radiance also appears around objects to indicate special qualities about them and at confusing or dangerous junctures to indicate a safe or preferred path. This radiance causes those people it surrounds to be healed of all wounds, purged of any diseases, poisons, foreign objects, afflictions (including lycanthropy, feeblemindedness, insanity, and blindness), magical compulsions, fear, and curses. The radiance also has been reported to move people for short distances to get them out of harm’s way. (They may be lifted out of a trap or out of the reach of enemies.)

The faithful of Lathander who are surrounded by the radiance also receive a brief message of some type from Lathander to guide them. Others may receive similar impressions if Lathander desires. If the radiance appears around a corpse of one of the faith, resurrection survival is automatically successful while the radiance is present. 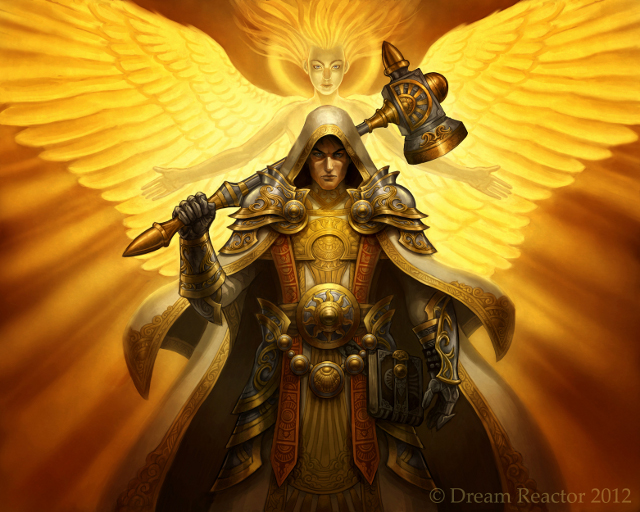 Wealthy and popular, the church of Lathander has opulent churches throughout the North, some of which push back the borders of good taste, as well as less audacious and more serviceable structures in most towns and cities and dotting all of the continent. The main room of a Church faces east and is open to the horizon, at least in part, so that the faithful can see the dawn. The high priest or priestess of a shrine or church is often called a prior or an abbess, although titles vary throughout the church.

The Lathanderian religion has a complex and byzantine hierarchy inside the cities, but also recognizes clerics and priests who establish small parishes amongst the more humble villages without requiring them to report directly to anyone. Regardless of rank or experience level, each Lathanderite priest is considered the master of the temple, shrine, or parish she or he is responsible for no matter the number of priests staffing the facility under him or her.

Novices in the Lathanderian faith are called the Awakened, and they gain the title of Dawnbringer upon becoming full priests. In ascending order of rank, the titles in general use by the Dawnbringers are: Dawngreeter, Dawnlord (the church does not use feminine form of titles often), High Dawnlord, Dawnmaster, Morninglord, High Morninglord, Mornmaster, High Mornmaster, and Sunrise Lord.

Dogma: The charge given to most novice postulants to the faith of Lathander is: “Strive always to aid, to foster new hope, new ideas, and new prosperity for all humankind and its allies. Perfect thyself, and guard ever against pride, for it is a sacred duty to foster new growth, nurture growing things, and work for rebirth and renewal. Be fertile in mind and body. Consider always the consequences of thine actions so that the least effort may bring the greatest and best reward. Wherever you go, sow seeds of plants, tend the growing things you find, and plant seeds of hope, new ideas, and plans for a rosy future in the minds of all. Whenever possible, see each dawn.”

Lathander’s dogma is filled with stories of optimism and perseverance. It is important to feel good about an upcoming event or else it will naturally go awry through negative thinking. Favorite sayings of Lathander include: “From death, life,” “There is always another morning,” and “In the dawn, beauty reigns, and the way is clearer.” At the same time it can turn to a dark and brooding tyranny against the heresies of the world. Witches, druids, undead, and lycanthropes are seen as evils that must be rooted out. They have an uneasy alliance with the royal families that regularly employ court wizards. They have come to accept some non-ecclesiastical magic must be permitted by the crown heads of the continent, but any practitioner without a royal writ risks terrible consequences by their inquisitiors.

Death is considered a reward for the clergy, since they are “going to Lathander” in the afterlife. Most clergy are not raised unless they are needed to complete a task. Undeath is considered the greatest abhorrence and sacrilege. 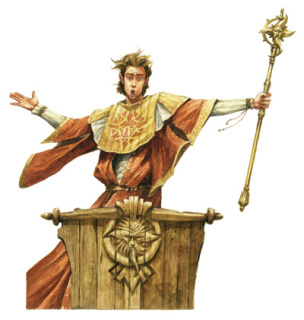 Day-to-Day Activities: Lathanderites seek to build anew, encourage the rebirth of barren areas and more productive growth in cultivated lands, drive out evil, and either restore civilization to heights it once had or lead it to new dizzying heights of harmony, cooperation, and pursuit of a unified congergation across all nations under the service to Lathander. To do this, they battle magic users, heretics and undead to nurture civilization; they plant seeds and new seedlings, they encourage and aid adventurers, travelers, traders, and pilgrims as the harbingers of culture; and they recover lost relics, pieces of literature, and works of art. Lathanderites study, restore, and attempt to duplicate, emulate, or expand upon these recovered items and works when possible.

Churches and shrines also sponsor athletic events and competitions where people of all classes and races can strive together in nonhostile competition in wrestling, distance throwing, target archery, running, jumping, horseback riding, or any of a number of other noninjurious sports. Other competitions sponsored by Lathanderian churches are for honors in the literary and fine arts. Such competitions are usually for a prize, which may be money, a special item or piece of art, or even a work written about the victor by a famous poet or artist. Winning a competition sponsored by the Lathanderites brings great status in certain circles.

Churches and shrines to Lathander provide aid to travelers and communities in their area as long as such aid is returned in good faith. Priests of Lathander try tirelessly to encourage those of good alignments to the more dedicated worship of the Morninglord.

Lathanderites are expected to make regular offerings of ideas, inventions, coins, discovered artifacts, or food to Lathanderian temples and shrines..

Holy Days/Important Ceremonies: As may be surmised, most ceremonies of Lathander are held at dawn. Actions taken and contracts agreed to at dawn are considered blessed by the god. Marriages held at Lathanderian temples or shrines at dawn are considered especially blessed and so dawn is when the church most often holds such services, even if they are inconvenient for visiting guests. Funerals consist of a solemn, candlelit ceremony called the Going Down. This ceremony is followed by a wake that lasts until dawn prayers. Funerals are not held for those who are to be raised.

The most important ceremonies of worship are the daily prayers to Lathander at dawn, often held outdoors or where the dawn can be seen. This ritual is followed in importance by the twilight devotions. Some churches and shrines also add to these two daily ceremonies an optional prayer and song to Lathander at highsun. To these daily devotions are added special prayers said when offerings are presented at the altar and when priests call on Lathander for guidance or aid. These ceremonies are all joyful, but dignified, and usually involve prayer, song, and ritual drinking of well water touched by the dawn. On special occasions, on Midsummer morning, and on the mornings of the vernal and autumnal equinoxes, priests of Lathander perform the Song of Dawn, praising Lathander with a blend of vocal harmonies and counter-harmonies of beautiful complexity. 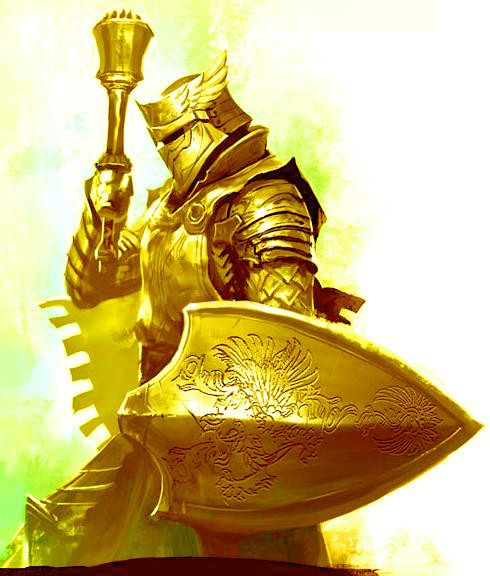 Affiliated Orders: The church of Lathander has a knightly order of paladins known as the Order of the Aster. Members of this order protect temples and shrines, serve to lead large military groups levied as needed to serve the church, and roam the land seeking to do good in Lathander’s name and promote his worship. Individual churches and shrines of Lathander do not usually maintain standing military forces of substantial size due to their cost, although they often retain warriors and members of the Order of the Aster to guard their establishments in numbers that each temple decides are appropriate and affordable.

Priestly Vestments: Priests of Lathander dress in bright long-sleeved robes of yellow, red, and white. These are often called “sun robes.” Those priests with their own temples have their robes trimmed with ornately crafted gold ribbons. A sunburst headpiece, worn toward the back of the head to emulate a rising sun or radiant sunpeacock, completes the ceremonial garb. The ritual robes used at many rural shrines are simple cassocks with a color scheme by rank. Novices and postulants wear brown; adepts and underpriests wear russet and crimson. Senior priests wear scarlet, and subpriors and those of higher rank wear white. Holy symbols of Lathander are often made of painted wood, cut from rose quartz or similar minerals, or enchanted to radiate a dim, pink glow.

Adventuring Garb: Adventuring clerics usually wear more utilitarian garb, but prefer reds and yellows, to the point of tinting their armor those shades. Most priests of Lathander favor chain mail, and often the only obvious mark of Lathander they bear is a gold circle on their shields and helm brows.